Since leaving life in the big smoke, it seems that London seems to be constantly on my mind... not necessarily in the sense that I miss it, but I think the city became such a big part of my life, that every new experience I have in Manchester is seen through a comparative 'London Lens'.

Of course, living in London is not just a part of life - Living in London becomes your life... its an amazing beast of a city that sweeps you off your feet and carries you away with its fast pace and pulsating life... so its only natural that now that I have left it, I still notice the imprint its left on my mind.

Leaving London didn't just mean leaving the city behind, it also marked leaving an amazing friend and flatmate - and a turning point in both our lives. I moved north to begin my new studies, and she took that giant leap into property ownership... so what better way to celebrate her new digs, and commemorate the end of our London life than to make her a housewarming gift.

As I become increasingly obsessed with paper and textiles, I was inpsired by some art I saw at the Great Northern Contemporary Craft Fair where one of the artists took a long sheet of what looked like postal wrapping paper, and painted and stiched designs of a skyline into it... I took that idea in a different direction and created a little piece inspired by the view from our former Battersea abode. 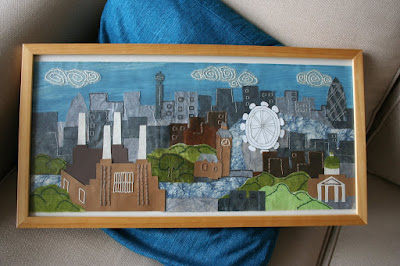 Ah yes, I spent many a day knee deep in craft supplies looking out over the inconic Battersea Power station recovering the energy I spent in London while expelling the creativity that the city inspired within me.

The craft is made of a combination of papers and threads, all handstiched together and layered to represent a number of inconic pieces of the London Skyline - can you recognize them?
Posted by Lazy Crafternoons at 11:27 PM No comments: