When this project started out I didn't know if it would all come together, but I knew exactly who I'd finish it for if it ever did. I was impressed by several map-inspired quilts that I'd come across online and in exhibitions including this stylized interpretation of the tokyo subway map and these much more literal (for lack of a better work) interpretations of maps as quilts showing terrain and landmarks.
I set out the challenge for myself to create a patchwork based on the London Underground. Using my trusty grid-paper notebook I drew out a scaled version of the map, and slowly built up a patchwork using nine-patches made up of 1-inch squares, which I then used as blocks to create nine-patches of 3-inch squares, and built the patchwork up so forth and so forth. 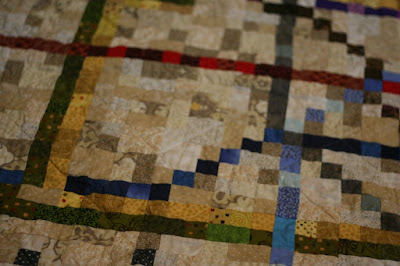 For a more varied effect (and perhaps to give my patience just a little bit of a break) I also worked in 2"x 1" rectangles and 2" by 2" squares into the map. I started out with a trial 'nine-patch of nine-patches' and by the time I finished my first one I was hooked and determined to continue.
In the end I had roughly 35 'nine-patches of nine-patches' plus more large scale ones to finish out the quilt. As I approached the outside and border of the map, I expanded the size of the pieces and blocks and faded into some purple and grey shades to frame it. 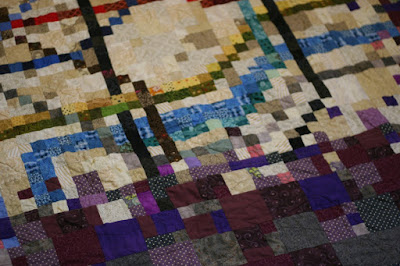 This was a very fun and rewarding project for me, and working with 9" blocks made up of smaller blocks, meant that it was a project I could work on at my leisure; putting it away and shelving it at times when I wanted a break, as well as pulling out small pieces to work on without ending up knee deep in fabrics and notions. To organise myself, I kept a "master box" with all the fabric scraps I was working from, as well as tray full of pre-cut 1 1/2" and 2 1/2" strips I was cutting from. I only needed the tray to prepare each nine-patch, and only needed to go back to the "master box" when it was time to replenish my tray.
It was really nice to make a gift for someone without the pressure of a specific birthday or special event in mind (although timing meant it worked well as a birthday/christmas gift).
Sometimes it's just really nice to make for the sake of making and give for the sake of giving, and as I worked on the project I became more and more pleased and inspired by the fact that I knew it would be a gift for a person who loves and appreciates London more than anyone else I know. 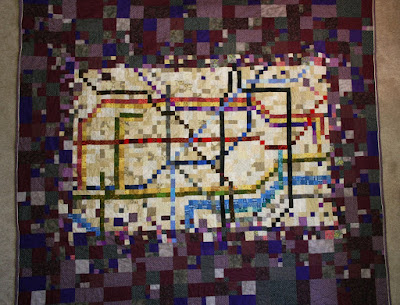