Amidst full-time work, other projects and life stuff, it is often hard to find time to sew.  Projects that I'm making for fun or for the sake of making, are easy enough to dip in and out of (I currently have two quilt tops in the queue to be quilted, and a few more unfinished projects to catch up on) - but projects with a deadline like a wedding or baby arriving have to be planned and managed - otherwise I'd always be giving baby quilts to toddlers.

One of my favourite things is making gifts for people. I understand that not everyone appreciates a hand made gift, but when I think of a special occasion and plan to make a quilt for someone, it is a process that I really savour and enjoy from start to finish, despite the fact that it often comes with a deadline.

When I was growing up my great aunt was an epic quilter, and often made us quilts for Christmas, birthdays or other life events and so it is a tradition I happily carry on - making gifts for my family, and extended squad in Canada and the UK.

This summer some dear friends of ours were getting married, and I was determined to make them a 'festival' style quilt, inspired by their love of music and festivals. I selected a number of fabrics that I felt had a real festival vibe, but something in the planning just didn't fit right and I couldn't quite work out how to execute a patchwork that reflected the vibe I wanted. I went around in circles, unable to decide what to do before packing it in completely.

I was only when I was on the verge of giving up that I looked more closely at one of the fabrics that had reminded me of vinyl records, that I started to look at the fabrics differently and instead of going for a folky/festival vibe - decided to take a much more graphic approach and create a quilt covered in iconic album covers.

Colour scheming this morning. Festival vibes. #menwhoquilt
A post shared by Chris Webb (@chrismakesthings) on Apr 30, 2017 at 3:42am PDT

A few weeks later, I had shortlisted a few album covers to try and decided to have a go at creating a patchwork version of David Bowie's Alladin Sane cover, by sketching out and testing a foundation pieced design.

Still going 😬... #vinylsquilt album 6 of 7 - can't have these classics without a touch of #Bowie. This was the first album cover I did, as a way to testing out the idea... each one got more complicated, but I still love the simplicity of this one.
A post shared by Chris Webb (@chrismakesthings) on Oct 24, 2017 at 11:32am PDT


My first one was a success, and from there I went on to do album covers my our friends' other favourite artists including Prince, Fleetwood Mac, The Beatles, Grace Jones and Bruce Springsteen.

The process of creating six album covers worked well around my other commitments, instead of working on a massive project - I was able to focus my attention in one one 12 inch cover at a time, sketching and making each cover individually as mini project.

Of all the blocks I made my favourite was the cover of Rumours by Fleetwood Mac. It was a slightly more complicated design with the body shapes and took a bit of consideration in terms of interpreting the many shades of black/grey/white so that the design wouldn't become too muddled, but I'm really pleased with the result.

My favourite cover from the album quilt I made, only because I listened to the bands while making the covers and it's been tooooo long since I've listed to #FleetwoodMac - it was also one of the most challenging blocks to work out the piecing on and I wanted to do Stevie justice... 🙌🙌🙌#menwhoquilt #foundationpiecing #vinylsquilt
A post shared by Chris Webb (@chrismakesthings) on Aug 19, 2017 at 4:29am PDT

When it came time to fit my six album covers into a layout, I felt I needed one more - and opted for a playful modern twist by including Taylor Swift - an artist who is a slight anomaly in this musical roll call, but totally appropriate for the gift I was making.  I'd also realised that all the album covers featured the artist in one way or another, so Taylor Swift's 1989 serendipitously fit with this unintended theme.

As the album covers came together, so did my playlist - going through the back catalogues of each artist and adding to a growing playlist as I worked on each cover.

In the end I think I was able to capture the literal references to music as well as the festival vibe I'd originally intended. Looking back this quilt is not unlike my Canadian Wild quilt I made a few years ago, with just a different subject and colour scheme - but this one is more my own because I used entirely my own foundation pieced designs, and adapted the overall plan as I went. 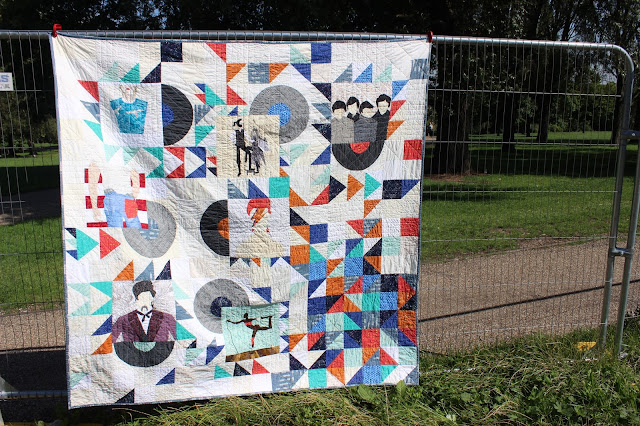 I now have a bank of foundation pieced designs which I'm tempted to digitise and share, but I don't want to take away the uniqueness of this project and that time I savoured working on the quilt my friends in mind. Music and memory are strongly linked for me, and so making this quilt has added a new layer for me - I know I'll never be able to listen to Rumours again without thinking about the quilt and my friends.