I've just finished a knitting project that I've been working on (and off) now for a few years, and finishing it has served as a gentle reminder of how much things have changed for me as well as the reasons why I started the 52 Weeks: 52 Crafts fundraising project.

In November 2009, I got an unexpected phone-call with news of a turn in my father's health which resulted in me dropping everything and flying home to be with my family. My father had been living with cancer for a few years, going through a range of treatments as well as having a major operation which really took a toll on his overall health. He was a fighter who continued to do the things he loved to and made a near-complete recovery from his operation which allowed him to spend the last year of his life spending time with his family, working hard, and taking advantage of his second chance to do all the things he had nearly lost.

Despite his very positive outlook and many signs pointing that he was on the mend, his health took a sudden turn which brought our family to his side in the hospital. When I arrived home to Toronto I joined my family in a very intense waiting game, where we watched my father carry on with the help of life support and waited for test results and signs of improvements.

When I don't know what to do, I craft. When there is nothing I can do to assist with a situation, I often try to keep my hands busy so that I at least feel like I am doing something. It is no wonder that arts and crafts are often employed as an occupational therapy, because it really feels good to make and create something at times where there is not much else to ease the passing time.

So in all those hours of waiting and watching, I started to knit.

The pattern was a simple entrelac knit scarf pattern I knew could be adapted to make a blanket. The pattern did not require any counting or real focus of my attention, so I bought some wool, picked up my needles and continued stitching until the very last minutes where we said goodbye to my father.

Over the next few weeks, the knitting was a comfort at times where there was a lot to cope with. I knit my stress away and kept myself busy, but as time progressed I put the project away as it became a sort of reminder of an experience I felt I had put behind me. When I returned to life in the U.K. six weeks later, I tucked the project away and stopped knitting. In fact, I didn't do much crafting at all; most of my creative activities slowed to a halt. I stopped playing music and guitar, I stopped knitting, I stopped making all together.

It took me a long time to notice the creative void I'd made in my life. It took even longer for me to realise that I wasn't just avoiding the knitting project because it reminded me of my father, but that I was avoiding any creative time or moments where I afforded myself time to relax and let my mind wander. I had been keeping myself distracted from my experience, and activities like playing guitar, drawing, knitting, and writing had become unstructured moments which were discomforting and overwhelming.

Avoiding these moments was easy in the short term, but ultimately only made my burden worse. I had taken away my main outlet for stress relief, and the longer I avoided it the harder it was to return to it.

But eventually... slowly but surely... I made room for this time in my life. In short focused moments, I got back to crafting and found time to check in with myself, let myself relax, and let myself think about the experience of losing my father. It was also very fortunate that I found a network of support where I was studying and met with other students and staff who had experienced loss.

I even made time to continue working on the blanket. Instead of a burden of unfinished work which I needed to put behind me, it became a symbol of something I was working through. At times when my I received news of my friends and family coping with their own struggles with cancer and illness - I knit. When I was missing out of important family events because I was overseas - I knit.

Over the course of two years, I always had the project by my side; sometimes picking it up when I needed a distraction, and sometimes picking it up when I needed to focus and remember. Instead of allowing my experience to hang heavy over me like a burden, I worked to accept it and carry it with me, understanding it for the strengths and weaknesses it brought to my life.

I thought that when I finished my blanket, I might look at it differently. I was worried that it might serve as a reminder of all the bad things and turn into a kind of physical manifestation of all the grief and stress I knit into it - but now that it's finished I love it more than ever. It represents my journey and serves as a reminder of how and why crafting is an important part of my life. 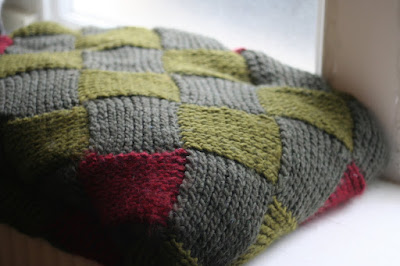 In 2012 I decided I'd try and put my crafting skills to good use, and turn the outlet that helped me into something that can help others - which is why I started my project to raise funds for Macmillan Cancer Support. It is my hope that by continuing to make in my spare time, I'll be able to raise funds for people living with cancer and contribute to the support offered by Macmillan.
Posted by Lazy Crafternoons at 1:02 PM