I'm going to publicly admit something, which I've learned to keep quiet in my crafting circles... they say that in polite conversation you shouldn't mention politics or religion in order to avoid controversy; but in the past, when I've let this little secret drop, I've found it much more explosive than any political or religious views.

My secret is: I totally do not get Cath Kidston.

There are two things in this world that other people seem to think I should love, but I totally do not understand the appeal of: one is the 'Glee' phenomenon and the other is Cath Kidston.

I mean, I see some of the appeal: I understand that Cath Kidston produces great designs, lovely products, and is obviously successful and literally has millions of fans, it's just that Cath Kidston fabrics and designs have never appealed to me personally, (probably because I'm not big on florals)... I guess where I normally break a lot of gender barriers in my interests and tastes, there is a line on the socially constructed gendered-interest spectrum where Cath Kidston's beautiful products and fabrics sit and the extreme end of my interests begin. I suppose to add to my confusion, the fact that I don't totally understand the appeal of it means I'm not sure what to do with it and/or how to make use of it myself.

But just because you don't understand something, doesn't mean you can't engage with it or give it a try. That's why "conquer C.K." has been on my to-do list for so long, and why I have been meaning to put some C.K. to use in a 52 weeks : 52 craft project.

So amid the recent Cath Kidston Sale, I walked right into the shop determined to find something to work with, and to my own shock and surprise, I did! I bought some lovely sale fabric to make a bag for a friend, and also fell in love (imagine my surprise) with this London Scene fabric, which I think is a timely fabric to use given the Jubilee and Olympic fever that has swept the world.

I also recently purchased this showoff bag pattern by made by r.a.e. (and the corresponding Sellers Licence) so that I could make and sell this for my 52 weeks : 52 crafts fundraiser.

It was a very straightforward pattern to follow, and I'm really pleased with the results. I made the bag slightly smaller than the pattern, but kept the straps a nice long length because I hate tiny strapped bags, I also adapted the inside pocket, and added wadding to the top part of the bag to give it a little more firmness and a slightly padded look.

Have a look at my results: 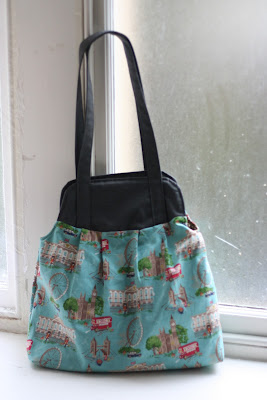 This bag will go up for auction tonight with 100% of the sale going to Macmillan Cancer Support, the same goes for the finger knit cushion and laser cut mobile from previous weeks. When the auctions are live they'll appear below.

Posted by Lazy Crafternoons at 1:57 PM