More and more I've been seeing these little coffee sleeves and 'mug hugs' popping up - and working out a design of my own has been on my 'to-do' list.

I've seen a range of different cozies and designs out there, which wrap around your coffee cup and close with buttons or velcro or different functions and notions, but I wanted to do something which replicated the simple one-size-fits-all cardboard sleeve you get in Starbucks or Caffe Nero.

I took my inspiration from a number of different tutorials, including this lovely one by Skip to my Lou but came up with my own template and design for sewing the patchwork piece into a sleeve.

The first thing I did was pick up a few cardboard coffee sleeves and then used them to create a template, which was the intended size and shape of my sleeve, with a 1/4 inch seam added. After preparing a front and back piece for the sleeve, I sewed them together leaving one side un-sewn for turning out - much like the Skip to my Lou tutorial.

To finish the project, instead of sewing a finishing seam around the entire project, I started sewing along the 'wrong end' (ie. the end which I left un-sewn, for turning out and the end which is folded under where the sleeve overlaps) and continued to sew along the perimeter until I was a few inches away from the 'right end' (the piece which shows when it is overlapped). 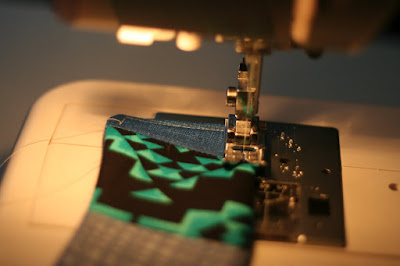 When I reached the other end of the sleeve, I looped the 'wrong end' (where I started) sewing back under the 'right end' so that I was sewing over both pieces and my original line of sewing was hidden. 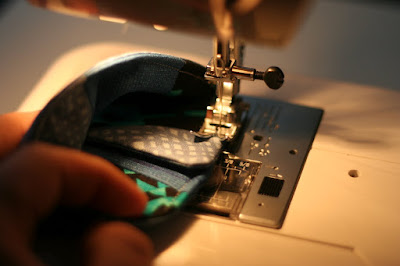 Then, following the edge of the sleeve I simply finished sewing the perimeter until I got back to where I started, and backstitched it at the edge where the overlapped pieces meet. 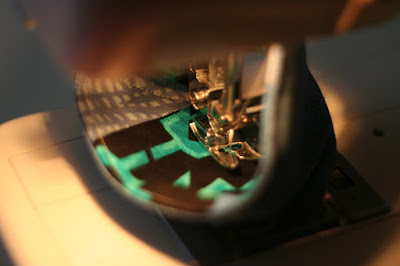 After tying my loose ends and trimming, I'm finished with a coffee cup sleeve that is just like the cardboard ones you pick up in the shops. 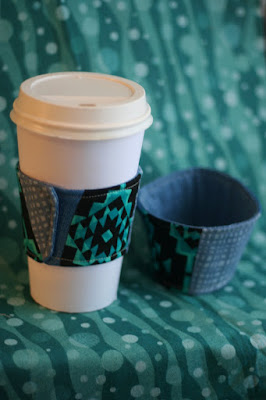 I also did a tweed/wool version as I thought the fabric would suit the project. 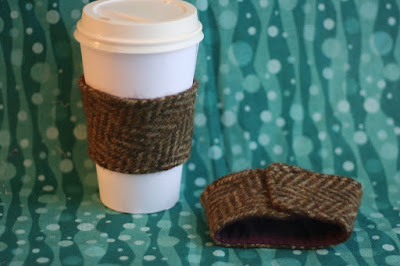 All in all, I did four sets of two coffee cozies, all of which will be listed on Ebay tomorrow, with auctions ending this Sunday. I'll update this post with links to the auctions as soon as they are listed. 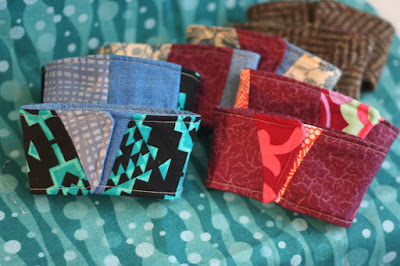 Posted by Lazy Crafternoons at 8:03 PM