It has come to my attention that not as many people as I assumed know what I'm on about when I talk about tangrams... For me, they are a nostalgic memory from childhood; playing with them as a puzzle game and also learning about them math class when we learned about proportions and fractions.
If you aren't familiar with them, here is a little info courtesy of wikipedia:
"The tangram (Chinese: 七巧板; pinyin: qī qiǎo bǎn; literally "seven boards of skill") is a dissection puzzle consisting of seven flat shapes, called tans, which are put together to form shapes. The objective of the puzzle is to form a specific shape (given only an outline or silhouette) using all seven pieces, which may not overlap. It was originally invented in China at some unknown point in history, and then carried over to Europe by trading ships in the early 19th century. It became very popular in Europe for a time then, and then again during World War I. It is one of the most popular dissection puzzles in the world." - Wikipedia
Although there is a serious side to tangrams, mostly they are just plain fun - you can use the shapes to make all kinds of animals, people, and more... and now with the internet there are so many printable activity sheets, books and designs that you actually stand a chance of completing all 6500 known tangram problems.

Here are just a handful.

So, instead of wooden shapes, I thought it would be fun to make some soft, chewable, throwable, pliable tangrams that would suit kids of all ages whether they are 5 years old and making cats or 55 years old and solving tangram paradoxes!

Here are my results. I made two sets; one in a bright owl fabric and another in a sweet alien fabric. 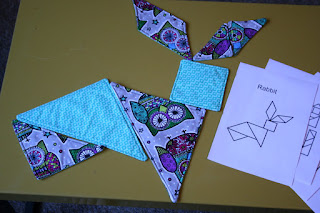 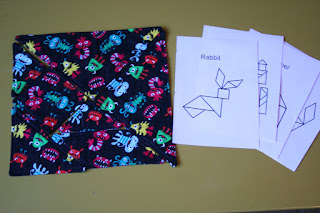 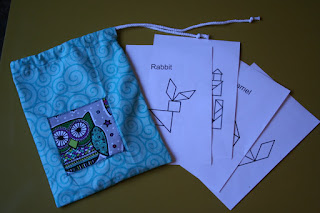 If you want to get your hands on my tangram sets and at the same time support Macmillan Cancer Support you can bid on them on ebay; auctions start Tuesday April 17th at 19:30 pm. I've also relisted a screen printed shirt from last week, which is still available.

Posted by Lazy Crafternoons at 7:44 AM